Chinese medical experts heading to the Philippines are seen during a ceremony before their departure in Fuzhou, southeast China’s Fujian Province, earlier this month. 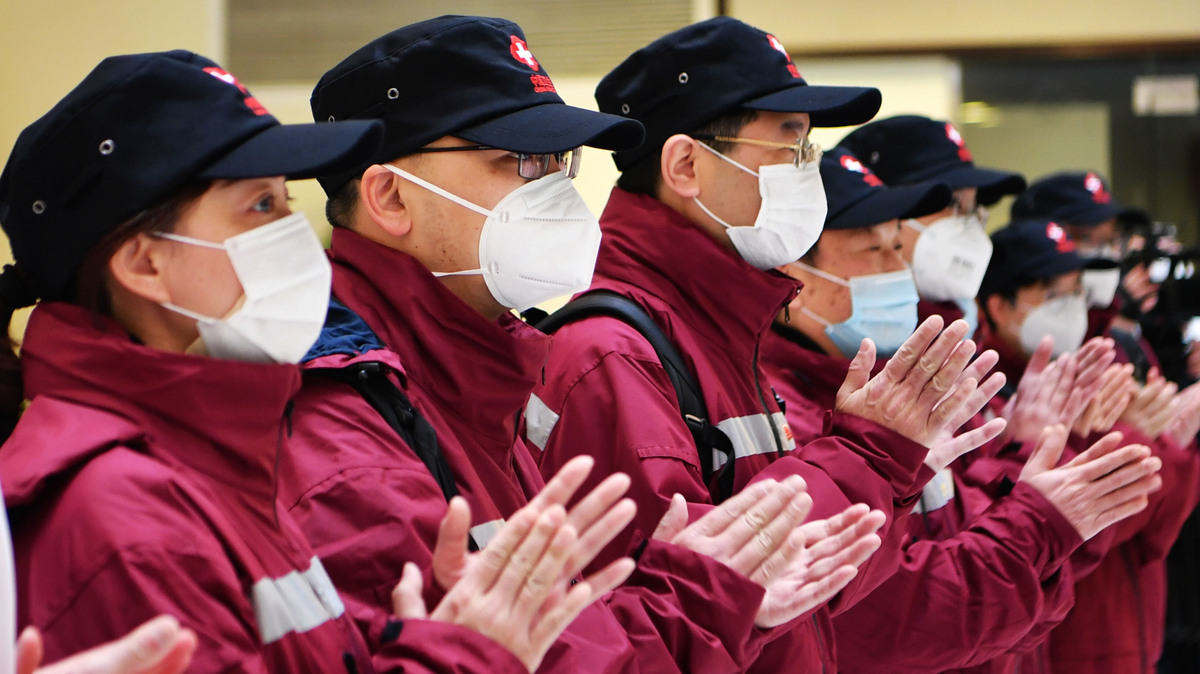 Chinese medical experts heading to the Philippines are seen during a ceremony before their departure in Fuzhou, southeast China’s Fujian Province, earlier this month.

An effort by China to express solidarity with an Asian neighbor that is also battling the deadly coronavirus pandemic has not gone exactly to plan.

Last week, the Chinese Embassy in Manila posted a music video titled Iisang Dagat, or “One Sea” in Tagalog, the language commonly spoken in the Philippines. The reference is to the South China Sea that lies between China and the Philippine archipelago.

But in recent years the South China Sea has been less a unifying waterway than a center of conflict, as Beijing has increasingly flexed its muscles over disputed islands that its maritime neighbors, including the Philippines, have traditionally seen as their own.

As recently as last week, Manila filed diplomatic protests accusing China of pointing a radar gun at a Philippine navy boat in the South China Sea and of trying to claim parts of Philippine territory. In a tweet, Philippine Foreign Secretary Teodoro Locsin Jr. called both acts “violations of international law & Philippine sovereignty.”

At 5:17 pm today the Chinese embassy received 2 diplomatic protests: 1. on the pointing of a radar gun at a Philippine Navy ship in PH waters & 2. declaring parts of Philippine territory as part of Hainan province—both violations of international law & Philippine sovereignty.

The song’s lyrics, in both Mandarin and Tagalog, were written by Chinese Ambassador Huang Xilian and performed by various individuals, including a Chinese diplomat, a provincial vice governor in the Philippines, a Filipino-Chinese singer and a Chinese television star.

The video shows masked Filipinos juxtaposed with scenes of Chinese medical teams and supplies arriving in Manila to help with the pandemic. Even Locsin, the foreign secretary, appears, thanking China for its assistance.

The song contains such lines as “because of your love that flows like waves hand in hand, we move to a bright future, you and I are in one sea,” according to a translation published in the Hong Kong-based daily South China Morning Post.

In one line which many Filipinos took to have a double meaning, the Tagalog “pagasa,” meaning “hope,” was used. But the word is also the name of a 92-acre island in the Spratlys chain that is claimed by both the Philippines and China.

Iisang Dagat: a song that has the gall to gaslight Filipinos just to promote a message of “solidarity”, of “working together” for the fight against the virus. If only the message came from somewhere with more integrity than the PRC lol #CNPHHealAsOne kuno

By Monday afternoon, the video posted on YouTube had more than 150,000 dislikes, while a Change.org petition demanding it be removed had gotten nearly 10,000 signatures by Tuesday.

One post on the video, which received hundreds of “likes,” referred to the West Philippine Sea, which Manila uses as the official term for the part of the South China Sea that lies within its exclusive economic zone.

“Excuse me but the West Philippine Sea has always been and will always be rightfully ours. Kindly stop exploiting our seas and building on our islands and shoals. Leave our fishermen alone and let them make a living from it as they have always done,” said Cynthia Diaz, whose Facebook profile says she’s from Manila.

What’s more, Filipinos are keenly aware the coronavirus originated in China. As the South China Morning Post noted, “while Beijing has sent health supplies including protective masks and testing kits, and dispatched Chinese doctors to offer advice to strapped hospitals in the capital of Manila, there are Filipinos who still believe the coronavirus, that causes the Covid-19 illness, was brought to the country by the Chinese workers employed by online gambling outlets.”

The Philippines has been hit hard by COVID-19, which has stretched its health care infrastructure to the limit. The country of 107 million has more than 7,700 confirmed cases and 511 deaths — giving it the highest mortality rate in Southeast Asia, according to Bloomberg.