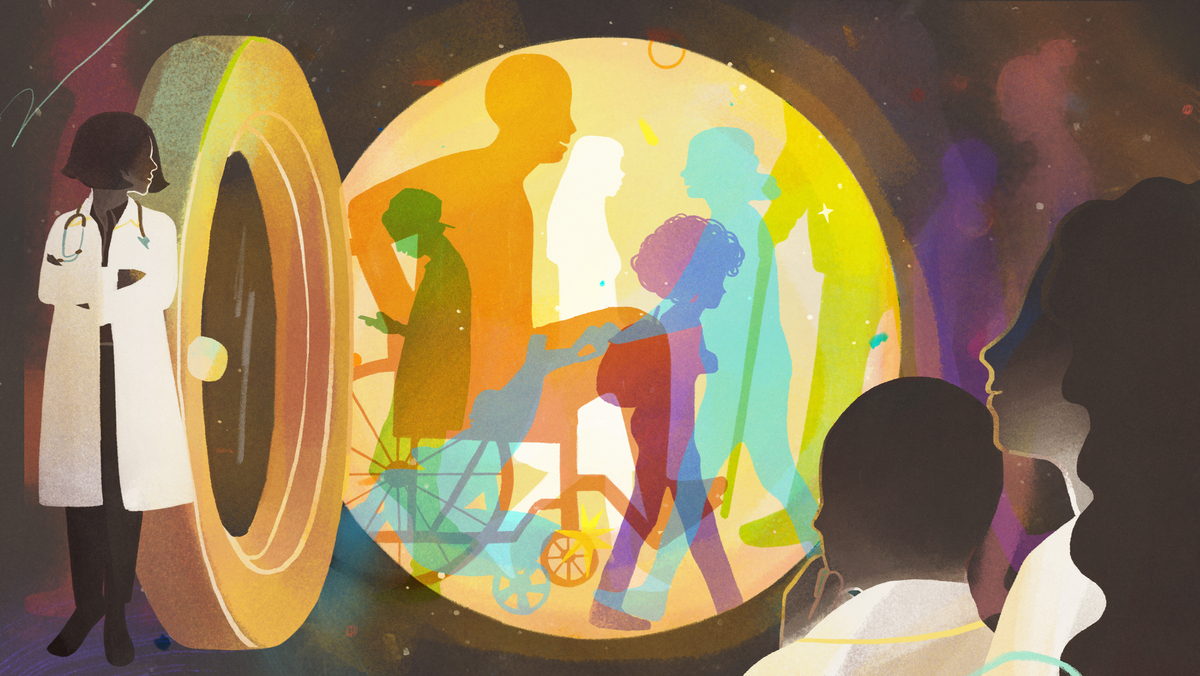 Ms. Chavez was barely sustaining her oxygen levels despite being on maximum support through the thick tubing in her nose. Two days before coming to the hospital, Ms. Chavez developed fevers and diarrhea, tested positive for the coronavirus in the emergency department and by the next day was unable to breathe. Her son and daughter-in-law would both test positive soon after as well.

She lived in a small apartment with them and their two small children. The family barely made ends meet — both worked essential jobs, one in a food-processing plant and the other at a fast-food restaurant. Without paid leave, they continued working even after others in their workplaces had tested positive for the coronavirus.

This anecdote is not an anomaly, nor is it the subplot. This is the main story of the COVID-19 pandemic in America, and it demands that all of us — doctors, politicians and everyone else — start approaching the pandemic from the lens of equity as a guiding principle. This is the only way we are going to bring a disease that’s now killing more than 1,000 people a day in the U.S. under control. As Joe Biden’s transition team moves forward in its strategy to stop the virus, equity must be at the center.

The virus does not strike equally

According to recent reports on NPR, in The New York Times and elsewhere, Black and Latinx people in the U.S. have contracted the coronavirus at rates significantly higher than white people per capita, are much more likely to become sick enough to require hospitalization and are more likely to die from that infection than their white counterparts. These disparities exist across state lines, in both urban and rural areas and across all age groups.

A recent working paper from Harvard University researchers shows that the particular racial disparities in COVID-19 deaths among younger age groups means that Black and Latinx populations have lost significantly more potential life years than their white counterparts. Additionally, the mental health burden — including serious consideration of suicide in the past 30 days — as described in a recent report from the Centers for Disease Control and Prevention, is disproportionately higher among Black, Latinx and essential workers than among white and wealthier populations.

Some of the reasons for these disparities are structural, with Black and Latinx populations disproportionately holding service jobs that — without an option to work from home or receive paid leave — required them to keep working during lockdowns. If we examine where the biggest clusters of spread are coming from in the U.S., jails and food-processing plants account for many of the largest. And in an alarming report by the CDC, 87% of the thousands of COVID-19 cases in meat and poultry plants in April and May occurred among racial and ethnic minorities. Data from Utah from March to early June suggest similarly disproportionate COVID-19 burdens on Black and Latinx essential workers in construction, manufacturing and wholesale trade industries.

These disparities are not by chance, nor are they explained by those who have tried to attribute blame, such as an Ohio lawmaker who groundlessly speculated in an Ohio Senate hearing in June that Black people might not be washing their hands as well as white people. Structural racism — the system by which some groups of people are exploited and marginalized for the economic and social benefit of others — is one of the main drivers of the American COVID-19 epidemic.

How an “equity” approach would work, instead

Ultimately, we need to approach the COVID-19 response through what we see as a lens of true equity — a permanent transformation in how our nation thinks about and responds to this illness and other epidemics that might arise in the future.

For example, telling a person to “stay home” to prevent COVID-19, without understanding that their home is a one-bedroom apartment with four people and no safe way to isolate, or that they are an “essential worker” with no ability to work from home or otherwise earn money to put food on the table, is largely devoid of pragmatic, actionable advice for many people. And it actually ends up perpetuating more harm to them and to society.

If government officials instead apply an equity lens to the ways they implement new lockdowns (which may be necessary in parts of the country), it would shift that strategy in the following way: First, they would carefully evaluate the effects that lockdowns could have on our poorest residents and prepare for those downsides accordingly. Closing businesses, for example, has an outsize effect on our poorest workers who live paycheck to paycheck. Paid leave supplemented by the federal government (not simply a one-time stimulus check) would be critically important for a number of our poorest families.

Furthermore, many of these laid-off workers are immensely skilled and want to contribute to helping their communities. By helping them repurpose their skills — and rewarding them accordingly with hazard pay — we can create a stronger workforce of people who can help directly with epidemic control, including with contact tracing, testing, helping to staff isolation centers and community engagement efforts around public health education.

Similarly, lockdowns still require essential services, such as grocery stores, to remain open. Accordingly, it is imperative to equip these front-line, essential workers with adequate personal protective equipment and reward them with hazard pay for working to keep society afloat at great personal risk.

An equity lens would also demand that we provide safe quarantine options outside the home for anyone who does become infected with the virus — such as in repurposed hotels, if they so choose.

Next: Engage and learn from the community

The focus on equity, at its foundation, is a critical examination of communities — how we gain their trust and how we understand their struggles within systems that are often designed to harm them. These are lessons that were crucial in the past two Ebola outbreaks, which two of us were directly involved with.

In the West African Ebola epidemic, for example, anthropologists helped medical response teams understand the stigma and misunderstandings of cultural traditions that had led community members to mistrust doctors, nurses and public health officials. Those insights — and changes in the way the medical team worked with local people — led to improvements in contact tracing and safer burials and ultimately brought the epidemic to a close. That entailed a careful focus on situating safe burial practices within sociological contexts, not just epidemiological ones.

Sensitively addressing such challenges, often deemed “social” or “political” issues, is very much part of the responsibility of the public health system — and has come up again during the recent Ebola outbreak in conflict-ridden eastern Democratic Republic of Congo.

Importantly, this means ensuring that communities are equal stakeholders and authors of epidemic response policies that affect them far more than the people typically charged with writing and enforcing these policies. With Ebola, for example, it was only when response teams worked with local leaders to adapt traditional burial practices in ways that prevented infection — yet still adhered to religious and cultural norms — that this major route of transmission stopped.

And although we are writing this essay within the American context, the same shortcomings have been experienced throughout the world — even in countries that were initially touted as having a strong response to the pandemic. In Singapore, for example, poor migrant workers were ignored, and that led to a resurgence of COVID-19 in this community — a resurgence of illness that then spread more widely.

Anti-racism protests and the equity lens

When protests erupted after the killing of George Floyd, we, as global health physicians looking at the tragedy through an equity lens, recognized right away that the coronavirus pandemic and the epidemic of social injustice and structural racism are deeply intertwined.

Accordingly, we argued that protests, while posing clear risk to protesters for contracting COVID-19, were nonetheless of critical importance because they could set in motion revolutionary changes that are necessary. Focusing on issues of racism and racial inequities, we realized, could directly reduce the impact of COVID-19 in Black and brown communities.

One case in point: Roxbury, a largely Black neighborhood in Boston that had little access to COVID-19 testing before Floyd’s death, suddenly got its own testing site. That was a direct result of the protests.

There were key differences, we would argue, between these anti-racism protests and earlier ones that sought to end lockdowns. The anti-lockdown protests did not directly address the inequities of a pandemic that is disproportionately killing Black people and other people of color. And while being able to get back to work is important, dying because you could never afford to stop working in the first place carries a different urgency.

That addressing inequity has not been the central guiding principle to the response in the U.S. ultimately speaks to why a diversity of expertise is essential as President-elect Biden establishes his team. Experts who failed to acknowledge the role of racism in the spread of COVID-19 have fallen into the trap of the epidemic silo. An epidemiologist who is focused only on transmission dynamics, for instance, will see protests only as a means by which COVID-19 may spread, rather than as a means by which inequities that underlie the epidemic could be illuminated and then, bit by bit, dismantled.

Much more needs to be done, and it needs to be done with vulnerable communities not at the margins, but at the center, of the response. Employing an equity lens is a necessary first step to stopping this pandemic once and for all — and necessary to preventing the next one from taking root.